The great news is that my final diploma artworks have been completed and are on their way to the location in the UK to be assessed by the judging panel.

It's been a chaotic household in the last few weeks - trying to complete three artworks and gather everything together.  The postage for this course has been very expensive - travelling from Western Australia to London is an awfully long way and the time taken and costs incurred certainly reflect that.  The sketchbook adds a lot of weight to the final packages being sent. 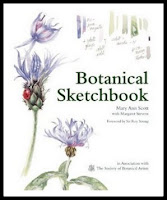 Interview with Mary Ann Scott here at Making A Mark. 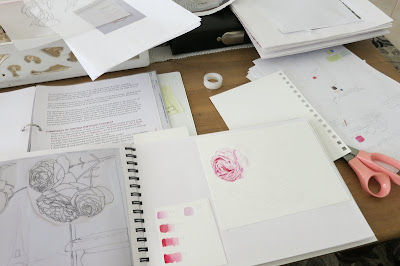 A big part of the whole assignment process is to work from sketches, colour studies and plan compositional ideas in a sketchbook supplied by the SBA -  to be sent on completion with the final artworks.  This sketchbook is also assessed and a mark is given to reflect a student's use of it. 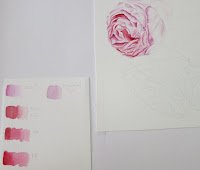 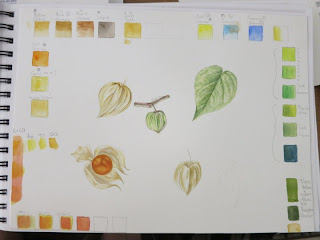 These are some of my earlier sketches and going back through the book made me cringe a little - my way of working is quite crude in the early stages! 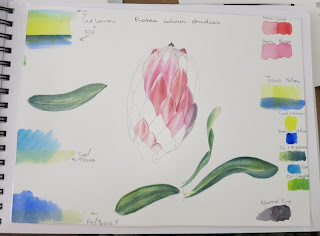 The studio is usually littered with scraps of sketch and watercolour paper with all these observations - rather than working tightly on a spiral bound book  - then all the bits are stuck into the SBA provided sketchbook to show the planning process.

It's a process that works for me, while the research and observations are recorded, the lion's share of accuracy and enthusiasm is reserved for the artwork once I feel intuitively I am on the right track.
It's not as pretty as many I have seen but for me it's a personal reference tool rather than for public show.  I'm not inclined to go back over it and try and embellish it,  to me that defeats the purpose somewhat. Things were done a little differently with the field studies - the sketchbook became a mini journal of sorts that travelled with me to the location ...
I included this as a separate journal to show the work in situ under very different conditions to an art studio.

Hopefully the judges can see how the sketchbook was significantly utilised rather than assess its beauty ...

For now I will breathe a sigh of relief .. at the massive amount of work completed, at the fact that summer has come to an end on the calendar, even though it's still hot and dry ...
and that there are holidays on the horizon and a season starting to turn ... 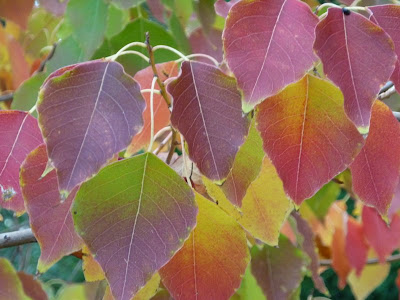 Vicki Lee Johnston
I am a botanical and natural history artist working in graphite and watercolour. I live in Western Australia and have a deep interest and passion for the natural world.

One must always draw, draw with the eyes, when one cannot draw with a pencil. (Balthus)

© Vicki Lee Johnston Anybody who knows me understands that I am a mad collector of nature treasures and in particular seashells.  ... 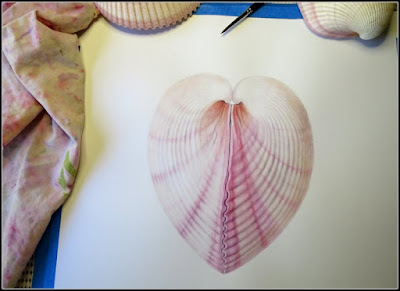 Promote Your Page Too

Please do not pin my my images.
All images on this blog are protected by copyright and may not be reproduced without the artist's permission thank you.
© All Rights Reserved
Vicki Lee Johnston 2011-2021